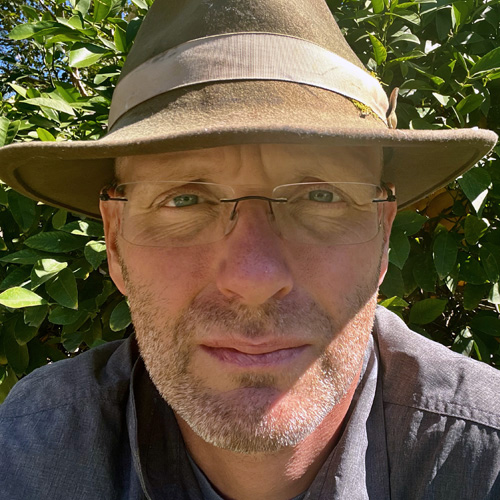 Shannon Still is a senior botanist at Nomad Ecology with extensive experience in rare plant and other botanical surveys, and taxonomic and ecological research. Dr. Still has led or worked on federal, state, and county lands, in private, non-profit, government, and academic settings; in California and internationally. He has conducted large-scale surveys for rare plants, compiled floristic inventories, monitored populations of rare plants, and assisted in the development and implementation of ecological restoration strategies. His experience also includes experimental design, extensive habitat mapping, database management, recording management actions, and data analysis in ArcGIS, QGIS, and in the R statistical environment. Dr. Still is proficient in California’s native and non-native flora and has worked widely across the western US. He taught California floristics at UC Davis for five years including teaching lab and field identification of the flora.

Dr. Still has been involved with several initiatives in the state to help the conservation of rare and endangered plants, and the native flora of the state. At the UC Davis Arboretum, Still helped in the development of California Plant Rescue which is an effort to collect seeds and germplasm of rare plants in the state. A large part of the process was monitoring the phenology rare plant populations to identify where and when to collect seed for the effort. Dr. Still also prepared and led a team of volunteers and student research assistants to help track the populations, collect herbarium vouchers, and collect and prepare the seed when ready.

Dr. Still worked with the California Native Plant Society as the initial state lead for the Rare Plant Treasure Hunt, a citizen-science effort to document rare plant populations in the state. With this position Dr. Still was tasked with setting up volunteer groups to find, identify, track, and report the locations of historical and recent occurrences of California rare plants. As part of his work at the Chicago Botanic Garden, Dr. Still developed models to predict the location of rare and workhorse plants in the western US, and then would undertake field work to find these rare and endangered taxa. This included modeling 571 rare and endangered plants for the Bureau of Land Management Plant Conservation Program as well as predicting the habitat change for the Wyoming big sagebrush with scientists from the US Forest Service.

Outside of Nomad, Dr. Still serves as an Herbarium Research Associate for the UC Davis Center for Plant Diversity and volunteers on the Rare Plant Program Committee of the California Native Plant Society. He also remains active in research programs related to the value of botanic gardens ex situ plant collections and separate projects on the conservation genetics of the flannelbush (genus Fremontodendron) and the relationships among the species of California poppy (genus Eschscholzia).